Andre spends his time globetrotting around the world and flitting from bed to bed, never tempted to stay in any of them.  Always searching for that soul his would recognize as the one he couldn’t live without.  A chance encounter teaches him something about himself he would never have expected. 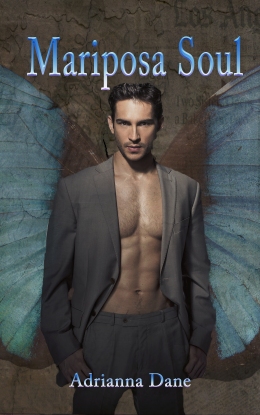 He turned a corner, heard the echo of a lonely siren in the distance, felt the moisture of late night rain cling to his face.

He should take that assignment his editor offered him today. It would send him far away from the temptation for a good year. Then maybe the aching need would finally dissipate and he would remember how good it felt to ease his body inside a woman’s soft caress.

Who was he trying to kid? Those days had been destroyed forever. He shoved a hand into the pocket of his coat. His fingers encountered the sharp edges of a business card and a wave of longing sliced through him. He didn’t have to pull it out to know whose card it was. He had it memorized, the name seared into his brain.

You have a butterfly’s soul, Andre, beautiful and fragile. I await the day you set it free to live the way it is meant to live. Come to me when you are ready.

He’d fought it for so long, trying to lose himself within other warm bodies, in other arms, through other lips. He’d tried so damned hard to surround himself with the scent of women, to make him forget.

But they had all paled, and were all forgotten because he could only remember one set of arms, one mouth that consumed and pulled at his soul, eyes that stroked him to life and filled the loneliness of his soul, like nothing had ever done before.

His response had scared him, yet excited him. He’d wanted to give in to the feelings, and although they’d felt right at the time, he’d shied from acknowledging what they meant about him.

He stopped walking and looked up at the street sign and sighed. Pulling deeply on the cigarette, he tossed it down and ground it with the heel of his shoe. It was as though it was inevitable his footsteps should have carried him to this particular street corner. He’d fought the feelings for so long and was tired of the struggle. The confusion inside him swirled around him, ever present no matter where he went or whom he was with.

But suddenly, as he looked up at the street sign, his hand closed over the card in his pocket. Mariposa Street. Was it a sign that he should accept the message of the soul he’d tried to forget? In Spanish, mariposa meant butterfly.

Was he finally ready to accept the nature of his needs to feel complete? He turned toward the street, saw a taxi, and hailed it. He felt the flutter of trapped wings beating inside his soul. Was he ready to fly? He knew he feared leaving the safe, familiar boundaries of his cocoon.

The taxi pulled up, he opened the door, and stepped inside.

“Where to?” the older gentleman asked him.

Again, his fingers encountered the card in his pocket, like a talisman. He didn’t need to take it out to provide the driver with the address.

The driver nodded, pulled away from the curb, and Andre settled back in the seat, his heart pounding—was it excitement or fear?

Now available at most ebook retailers