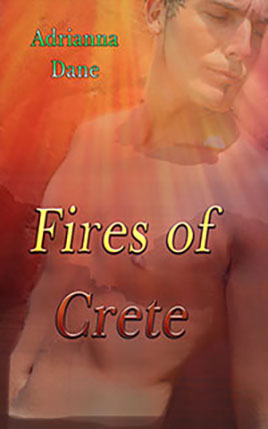 Unexpected, instantaneous, and combustible attraction. Two strangers meet online sharing a passion for Minoan history. An invitation to holiday on Crete. Andrew Larson, a studious university professor, and Stephanos Angelika, an attractive up-and-coming young Greek executive, finally meet, and an undeniable need blazes to life. They have two weeks to explore this heady level of their relationship. Is it lust or something deeper?

Andrew, adopted as a child, has only a medallion that ties him to his Greek heritage. And a faded photograph of a young woman, the name of a village scrawled across the back. He sets upon a journey of discovery, but finds even more than he bargained for when he sees Stephanos awaiting him at the airport on Crete.

Stephanos leads a cautious, solitary life as a young gay man leery of living his lifestyle openly, already estranged from a family that has disowned him. It’s a huge leap when he invites Andrew to visit. Upon seeing Andrew, Stephanos knows everything will change.
The friendship that began online erupts into something far stronger and lasting. Will the weight of past wounds destroy the deepening bond they have come to share? Or will it be love that triumphs?

Stephanos left the apartment at dawn, before Andrew was up, in order to walk the silent streets and clear his head. He had to come to a decision; the sexual tensions that existed between him and Andrew had reached breaking point. He came to the steps of a Greek Orthodox Church. He often wound up here either late at night or early in the morning, when he was particularly conflicted. Something drew him to climb the steps and walk into this sacred space. Perhaps he would find that elusive answer he searched for in regard to his relationship with Andrew.

He studied the Byzantine-inspired architecture, focused on the cross affixed above the archway, and then walked inside. He inhaled the incense-scented air, the aroma of polished wood, studied the rectangular stained-glass windows for a moment, then sat down in the last pew and allowed the peaceful spirituality of the atmosphere to envelop him. His father had lived by the creed of this church. Had Stephanos wandered so very far away? He closed his eyes and bowed his head, instinctively reciting the prayers he had memorized as a child. They were a comforting ritual, and slowly the tension eased. All the memories of his youth came flooding back. Bittersweet now. He opened his eyes and stared up at the cross mounted above the altar, waiting for an answer.

He jumped when a hand settled on his shoulder. He glanced up, was shocked when he saw Andrew staring down at him.

“What are you doing here?” he whispered as he slid deeper into the pew.

“I heard you leave, and I decided to follow. Call it a hunch,” Andrew said quietly.

Stephanos stared at the cross. “I don’t know what to do,” he finally admitted out loud. “I think I am a coward.”

Andrew reached for his hand, and Stephanos gripped it tightly. More tightly than he probably should have.

“What do you want to do?” Andrew asked.

Andrew’s steadying touch felt right to Stephanos. His presence was steadfast and necessary to Stephanos’s happiness and well-being.

“I don’t want to push you away. But I want more than friendship. I don’t want to lose the camaraderie we have established and exchange it for something less…substantial and fleeting, Andrew. Our relationship is too important to me.”

Andrew squeezed Stephanos’s hand. “Realistically anything beyond friendship can’t last. I have to return to the States in less than two weeks. But I’ll admit that I want more even though I know it can’t last.”

“I don’t know what to do. It seems I’ve waited all my life for now—for meeting you. And now I’m paralyzed. What if it’s not right? We can’t go back.”

“Everything is a risk. You could have stayed in the mountains, with your family, and never known something of the world. Do you regret what you did?”

“There are some days that I do, yes.”

“Because you’re alone now? But you know who you are, don’t you? Better than you did before? Do you really want to go back to that naïveté?”

It didn’t take Stephanos long to consider his answer. “No. Even with being disowned, I couldn’t change it if I wanted to. It’s inside me, and I can’t alter who I am, although some would think that would be an easy thing to do.”

“Risks are part of life. They’re scary, but they make us feel alive. Don’t you think?”

“Alive,” Stephanos repeated. “Yes, but I want more. I want to be free.”

“Come home, Stephanos. I want to be free too. I want to fly. With you.”

Stephanos looked at the angled fresco on the domed ceiling. Again, he thought of Icarus and how high he flew, how close to the sun he got. Was it worth it to feel the fire, to soar that close to a flame so bright? Wasn’t there always a price to be paid? Perhaps wounds borne? Stephanos twisted around to look at Andrew. He smiled and then stood up.

He got the answer he’d come for. Maybe not in quite the fashion he’d expected, but it was a response he embraced.

The sun was just beginning to ascend in the sky as they made their way back to Stephanos’s apartment, walking slowly. Stephanos still gripped Andrew’s hand, afraid to let go.

It was as they rounded the corner of Stephanos’s building that he pulled back and dragged Andrew into his arms. It was at the corner of his street where he kissed Andrew, thrusting his tongue deep into Andrew’s mouth. It was in the elevator that Andrew cupped Stephanos’s face with both hands and claimed a kiss, tongues clashing, lips fused, until the bell dinged and the elevator doors silently slid open when it arrived at Stephanos’s floor.

But it was inside the apartment when the fire roared out of control. Hardly had the door slammed shut when the inferno consumed them with the hunger of suppressed lust now freed as a wildfire racing across a drought-ridden field too encompassing to even think of quenching before it consumed everything in its path. And more than anything, Stephanos wanted to be engulfed by the fires of Andrew’s passion. Anogia and Andrew’s search for his past would have to wait another day.

In their own world now, sequestered from prying eyes, passion knew no bounds. Hands and tongues and bodies fused and mated. There was unleashed urgency to their movements, to their ravening hunger. And there would be no stopping the firestorm that erupted with full force.