Sylvie Taylor has never experienced sexual fulfillment, never felt uncontrolled desire. Her best friend, Allison Hunter, has kept secret her taste for the dark side of passion. Introducing Sylvie to sensually seductive Daimaen Sinclair, a Master of the game, has Sylvie yearning for the forbidden.
But someone has made an attempt on Sylvie’s life. Can Daimaen protect her, or is he the reason someone wants her dead?

Sylvie opened one eye and looked at the clock. Ten o’clock flashed at her in blue lit digits. She sat up quickly, and the blankets fell away exposing her to chill air. Shock filled her as she realized she was completely naked. She’d never done that before. “OhmyGod!”

“What’s the matter?” There was immediate concern in Allison’s voice.

Sylvie tried to recover smoothly. “Nothing, it’s nothing. I…ah…just remembered something.”

“Daimaen’s not still there, is he?” Allison was still suspicious.

“No, he’s not.” She needed to get Allison off the phone. Sylvie’s emotions were in turmoil. She had to try to sort out what happened last night.

“Soooo. Tell me, was he what you expected?”

“Allison, I just woke up. I can’t talk about this right now. I’ll call you later, okay?”

“Now wait just a minute, you aren’t getting off the hook that easy. Meet me for brunch later.”

“All right, later.” Anything to get Allison off the phone.

“Eleven-thirty at Sandi’s, okay?” Allison was not going to let it go.

She lay back against the pillows, pulling the blanket up tight beneath her chin. Her body felt amazingly relaxed, yet sensitive, all at the same time. How could she have let that happen last night? That man should be outlawed. It was like he’d hypnotized her, and she realized she’d have done anything he asked.

Her eyes widened and she gasped. He hadn’t even removed his clothes. He’d done it with his voice and his hands. Whoa, Daimaen Sinclair was a dangerous man. Certainly, dangerous to her. How had she let him take such total control of her? That never happened—she’d always made sure she was the one in control. Her dates had never
questioned it. Maybe that’s why they’d always been so forgettable. Unlike last night.

She pushed back the bedcovers and reached for her robe. She needed a cup of coffee. Maybe it would help clear the fog from her head so she could think straight.

She halted abruptly as she entered the living room. Her dress, which she vaguely remembered leaving on the floor, was now neatly folded over the back of a chair. The untouched coffee tray had been removed as well. She padded into the kitchen. Everything was neat and orderly. The timer on the coffeemaker had been set and coffee brewed, ready for her to pour. Sylvie knew she hadn’t prepared it the night before. Daimaen had to have done it.

As she moved farther into the room, she noticed a note next to the coffeemaker.

Sylvie, thank you for a memorable evening. I have a meeting to attend on Saturday, but I’ll call you on Sunday. Think of me, D. The handwriting was dark, bold, and masculine, just like the man. She read it several times. She brought it closer to her face, closed her eyes and inhaled. There was a faint hint of his remembered scent. Her
heartbeat quickened, she had to sit in a chair before her legs completely gave way. Damn, just reading the note and that faint scent had her aroused. 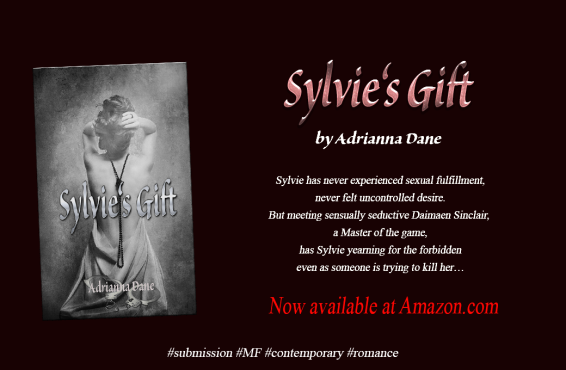