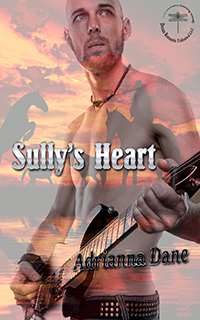 Sexy rock star Luke Cantrell has everything going for him. He parties hard and has no shortage of bed partners. Except he can’t have the one thing he truly wants. The bad boy of Texas and the golden-haired son of an affluent rancher. Friends for life, but Luke always yearned for more than friendship. With the truth destroy their relationship or will it give them both something they passionately desire but were afraid to reveal? Will Sully understand if Luke finally tells him the truth? Or will Luke lose his friendship forever? It’s a gamble he finally has to take.

Sully shoved the hat back on his forehead and then shifted to dismount, the sound of creaking leather loud to Luke’s ears at just that moment. The branches of the tree shifted and creaked and the hiss of a breeze shuddered across his bare skin.

He was standing here naked in front of the one man he wanted more than any other. And the one he couldn’t have, not if he wanted to keep his friendship.

Luke drank in the vision of Sully as he stepped down from his horse. The Western cut jeans cupped his tight ass perfectly. Long, muscled legs that carried him closer to Luke, wonderfully broad shoulders, and a chest that had obviously filled out nicely since the last time they’d been together.

He pushed off his hat and strode toward Luke. His thick, blond hair was just as Luke had remembered it, streaked by the sun, like a field of shimmering wheat, darkened at the moment with sweat. And his eyes, those deep blue eyes that seemed to take in everything, study it, and understand it. Calm, strong, and alert all at the same time.

He stopped right in front of Luke and looked at him intently. Luke saw things in those eyes, but it couldn’t be what he thought. It wasn’t possible.

His fingers curled into fists of impotence. He wanted to reach out to hug him close, but he didn’t dare. It would ruin the moment.

They stared at each other for a long time, almost a gap of years spanned between them as they studied and tried to learn what the time apart had done to each of them.

“Why’d you come back?” Sully wanted to know.

For you, Luke wanted to answer. Instead he shrugged. “Unfinished business, I guess.”

Sully kept staring at him intently and Luke could feel his cock beginning to tighten in response to that intensity. He was going to shame himself, he just knew it. He should just get dressed and hightail it out of there fast before something happened that shouldn’t.

“How’s your old man? I haven’t seen much of him lately, but I got the feeling he’s turned harder over the years. I’ve asked him about you when I’ve seen him in town, but he just grumbles something about you being a druggie and he didn’t talk to you. If you didn’t send the postcards now and then, I’d have worried you were dead in a ditch someplace. But according to the newspapers, you’re doing real fine. I’ve been wanting to come to see one of your concerts, but you know how it gets.”

Luke still couldn’t look away. He had to wonder what else his father had said to Sully.

He’s a fancy faggot, Vance, not someone you should be associating with. Luke wouldn’t put it past his father saying just that sort of thing.

“Yeah, I know. I’ve been wanting to come back for a visit, but, well, there just didn’t seem to be time.”

Another long silence dropped between them. Luke’s gaze dropped to Sully lips. There were so many times when he’d wanted to taste them. He felt his heart hammering against his chest. His nipples tightened as cool air wafted over them.

Luke held his breath. What was he trying to say? He licked his lips, nervous as hell that he was going to say the wrong thing, make a misstep.

“I-I’ve missed you, too. More than you know.” Something changed in Sully’s eyes.

And then suddenly he swooped forward, taking Luke by surprise, and planted a searing kiss on Luke’s lips. Nothing could have shocked him more. He felt Sully’s tongue press between the seam of his lips and plunge deep into his mouth. Sully wrapped his arms around Luke and tugged him close.

Luke was too shocked to respond right away, but then he lifted his arms and wrapped them around the broad shoulders of this gorgeous man and pressed himself tightly into his embrace.

One thought on “Sully’s Heart – EXCERPT”