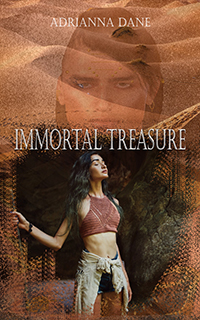 Khafeelamtek, First Vizier and Caretaker of the Secrets of the King, has been awoken one last time by the sun god, Ra, to perform an important task. His reward for successful completion will be peace in the afterlife–something he has coveted for millennia. But he did not count on becoming so quickly, and deeply, attracted to the lovely Dr. Cassandra Linsey, an Egyptologist and Linguist, who also happens to be the person selected by the gods as the caretaker of the secrets he must share.

Khafeel has five days in which to gain Dr. Linsey’s trust and reveal the existence of the mythical province of Niveka. Complicating things and adding a particularly irritating thorn in his side is the appearance of the beautiful, spoiled Sahrametatiri, twin sister and royal wife to the king, who has been awoken by Bast, to assure that Khafeel succeeds in his mission.

What should have been a simple chore of revealing proof of the existence of Niveka and thereby obtaining immortality for their ancient, doomed city, and achieving the long-sought peace in the afterlife for himself, has culminated in the painful realization that the most rare and precious treasure he has ever known must be abandoned…and there is nothing he could do to change their destinies. Or is there?

Had his mind left his body somewhere over the last centuries? This woman attracted him like no other of his own time. Why that was, he had no idea, except that he’d been without a woman for far too long.

Khafeel reminded himself that he needed to gain her trust. That’s all this was about. To learn more about her and make her comfortable with his presence.

Could he deceive himself that way? He studied her as he handed her the glass of chilled red wine and sat next to her at the table in the darkened corner of the smoky bar. He breathed in her scent, so different from the women of his time. Their scent had been dense and musky, meant to sexually arouse, and hers was clean and simple, reminiscent of sunshine and summer wind.

She didn’t wear the heavy cosmetics that were so popular with the women of his city. Yet, the small sandy freckles that covered her face and arms were very seductive, and he was consumed by the urgent desire to taste each one.

He sipped at his wine. He knew why Zyphir had chosen her. Isadora’s hair had been the color of mulled wine, dense and lush. He was certain the red hair had drawn his attention first. But unlike Isadora, this woman’s hair, though also red, was the color of an autumn sunset, vibrant and fiery, with sparkling energy.

“What is your name?” he asked her. Even though he already knew it. It might make her wary if she thought he had prior information about her.

He caught a movement from the corner of his eye and turned his head to look up at a narrow shelf over the bar. Should he be surprised? He saw the shadow of a feline curled and watching, almond-shaped topaz eyes glittering in the half-light.

What was Sahra doing here? What did she expect to see? Didn’t she have enough to occupy her without spying on him? His gaze locked with hers, silently commanding her to disappear.

Slowly, the speckled cat uncurled, rose to its feet and stretched, then delicately leapt from the platform onto the end of the bar. As Kahfeel watched, it daintily stepped onto a barstool and then leapt to the floor, sauntering through the doorway as though she had every right to be there.

“Did you see that cat? I didn’t know they allowed animals in here.” Kahfeel turned his attention away from the cursed animal.

“I wouldn’t worry about it. It was probably a stray that wandered in through the front door. I’m sure someone will whisk it back outside.”

“Oh, I wasn’t worried, just surprised. It was actually quite a beautiful cat. I’ve never seen one before with that unusual speckled coloring.”

Sahra was unusual all right. And a pest.

A blush of delightful color stole into her cheeks. “Cassie. Well, really it’s Cassandra, but everyone calls me Cassie.”

“Cassandra. It is a beautiful name, for a beautiful woman.” He tipped her head so he could look into her eyes. Bright emerald orbs glittered in the light, and reminded him of the lush ferns and palm trees of a desert oasis. “Do you know what I would like to do to you right now, Cassandra?”

She wore no lipstick, yet her bare, rosy lips tempted him to taste her. To him, she needed no enhancements—she was perfect as she was.

This was not how it was supposed to go, but he couldn’t help himself. As he watched, her lips trembled and parted, her tongue darted out to trace a glistening path along her lower lip. It was too much to resist. He lowered his head and claimed her sweet taste, delved with his tongue into her hidden moist depths.

He pulled her closer to him, felt her soft curves crushed against him as he lingered to sip leisurely at her seductive mouth, tasting succulent woman and fragrant wine.

He felt her hands inch upward along his back. His cock hardened against his leg, thickened with the desire to sink inside her moist, slippery channel. He’d never been so tempted by a woman, but this one was like no other he had known.

When they separated, the look she offered him was heavy with passion and, curse the gods, he knew he must have her.

“You have a room here, Cassandra?”

Also look for the accompanying story, Jewel of Niveka.

One thought on “Excerpt from Immortal Treasure”